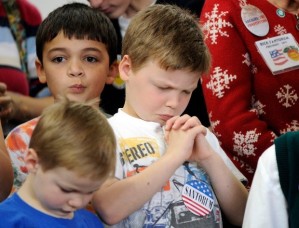 Missouri voters on Tuesday passed its “right to pray” amendment, reaffirming the right to pray in public and in schools.

In an effort to further define First Amendment rights, the measure formally known as Amendment 2 passed with 83 percent of the vote. The amendment’s backers say it helps protect Missouri’s Christians, about 80 percent of the population, who say they are public targets.

While the religious protections outlined in the measure are already guaranteed by the Bill of Rights and the Constitution, critics are drawing attention to another part of the amendment:

“No student shall be compelled to perform or participate in academic assignments or educational presentations that violate his or her religious beliefs.”

The Missouri Constitution already allows people to worship according to personal beliefs, and prohibits discrimination based on religion for public office, testifying or serving on a jury, according to the Associated Press.

Republican state Rep. Mike McGhee, who introduced the measure, told Fox News that the section stems from a 2006 case, in which a Missouri State University class assignment was to write and sign a letter to the state legislature to support gay adoption.

But critics are skeptical. A New York Times editorial notes that the clause will “create confusion and wreak havoc in classrooms” by giving students the power to refuse completing or participating in any assignments that they claim violates their religious beliefs. It permits students who believe in creationism, for instance, to decline any assignments on evolution.

McGhee, however, says doesn’t anticipate any instances where a student might claim “it’s against my religion to do algebra.”

The move in Missouri is in part seen as one of several pieces of state legislation nationwide that allows for more room for religion and intelligent design in public schools. The Tennessee state Senate passed a bill in March that protects teachers who allow student to question and criticize “controversial” scientific theories like evolution. Indiana legislators in January moved forward on a bill that would allow school districts to decide whether to include creationism alongside teachings of evolution in science curriculum.

Research from two Pennsylvania State University professors revealed last year that the majority of public school biology teachers in the U.S. shy away from teaching evolution because they’re either unwilling or unprepared to teach it: some advocate creationism while others are afraid to address the topic for fear of controversy.

According to results of the 2009 National Assessment of Educational Progress, a federal test known as the Nation’s Report Card, less than half of U.S. fourth-, eighth- and 12th grade students were considered proficient in science.