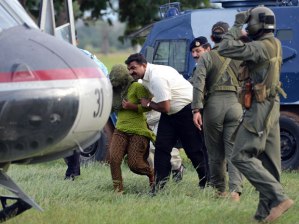 A Pakistani military helicopter plucked a young Christian girl accused of blasphemy from a prison yard on Saturday and flew her to a secret location after she was granted bail.

Live broadcasts showed heavily-armed police surrounding Rimsha Masih, believed to be no older than 14, covering her face with a green scarf as she walked to the helicopter.

A judge granted Masih bail on Friday and her lawyers are applying to have charges that she burned pages from the Koran dismissed after a local cleric was detained on suspicion of planting false evidence to stir resentment against Christians.

Even before that arrest, Masih’s case provoked international concern as she could face execution under Pakistan’s blasphemy law despite her young age and reported mental problems.

The dramatic nature of Masih’s release underlined the fear for her life.

The lawyer prosecuting her suggested she could be lynched if found not guilty. Blasphemy charges are frequently followed by deadly riots against minority communities.

Two high-ranking government officials who had suggested its reform were shot dead, one by his own bodyguard. Lawyers threw rose petals at that killer and the judge who convicted him was forced to flee the country.

The number of cases brought under the law is rising rapidly and rights groups fear it is mostly being used to settle personal vendettas.

Since 1987, there have been almost 250 blasphemy cases, according to Pakistani thinktank the Center for Research and Security Studies.

It said 52 people had been killed after being accused of blasphemy since 1990.

Read the original article at http://news.nationalpost.com/2012/09/08/pakistan-girl-accused-of-burning-koran-given-bail-gets-dramatic-helicopter-release-from-prison/