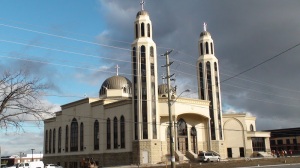 Brampton, Ontario – Peel Regional Police are investigating after an incendiary device was thrown through a window of a newly built Brampton church at around 4 a.m. Friday, causing a fire that damaged its furniture, walls and floors.

The Brampton Fire Department arrived on scene at The Coptic Orthodox Christian Church of Archangel Michael and St. Tekla and determined the fire was caused by a Molotov cocktail thrown through a basement window.

The two-storey church, which cost around $7 million to build, was opened to the public on Oct. 17. Damage is estimated at around $100,000.

“The physical damage wasn’t that much but the smoke damage was pretty severe,” said Alber Hanna, a member of the church’s board of directors. “The smoke permeated throughout the whole church, including the ground floor, second floor and the sanctuary.”

“We exceedingly thank God for his love and mercy that he saved his church from such a terrible deed,” said Father Morcos Hanna, who called the incident “a careless and cowardly act of vandalism.”

“We pray that the police may find those who caused or are behind this so that we get proper closure,” he said.

Read the original story at http://www.thestar.com/news/gta/article/1278654–police-investigating-brampton-church-blaze