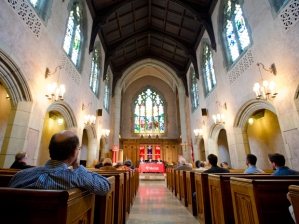 MONTREAL – The questions asked by the Parti Québécois government in an opinion poll published last week offer a good indication of what the party thinks about bending to accommodate religious beliefs.

“Regulating religious accommodations is protecting Quebec values,” reads one statement — agree or disagree. “Putting an end to unreasonable accommodations is favouring social cohesion and integration,” another states. “All religious symbols should be prohibited in the public square. Religion is a private matter and must only manifest itself in private,” a third reads.

All three statements were supported by a majority of respondents in the government-commissioned poll, which the PQ is holding up as evidence of the need to introduce a new charter enshrining Quebec’s secular values.

The current mood in the province does not exactly encourage religious people to declare their faith, but a conference this week at McGill University was the beginning of an effort to fight back.

“Whereas religious groups were very intolerant of non-religious people in the past, I think it’s switched now,” Spencer Boudreau, a professor of education at McGill, said in an interview. “Now the intolerance seems to be for religious groups, and it’s much easier to have no religious affiliation than it is to announce that you have religious views.”

The conference, titled Bridging the Secular Divide, was held in the chapel of McGill’s religious studies building, a room illuminated by a stained glass depiction of Christ’s Ascension. The building was once called Divinity Hall but is now simply the Birks Building, in honour of benefactors William and Henry Birks, a change that mirrors Quebec’s transformation from a religious to a secular society.

Religious groups were very intolerant of non-religious people in the past. It’s switched now.

Participants in the two-day meeting included current and former members of Parliament and civil servants from a variety of faiths. The stated goal was to explore how religious perspectives can “inform the national conversation,” but there is a heightened sense of urgency in Quebec as the PQ moves forward with plans for its new charter.

Initially billed as a Charter of Secularism during last year’s election campaign, the minister responsible, Bernard Drainville, has now suggested it will be called the Charter of Quebec Values. But its aim remains unchanged: limiting the role of religion.

In an interview last week with Le Devoir, Mr. Drainville said he sees the charter as the “Bill 101 of our era,” referring to the French language charter enacted by the first PQ government in 1977.

“Quebec society is more and more multi-ethnic and multi-religious, which is an exceptional richness. But if we want to be able to properly manage this diversity, we will have to give ourselves rules and common values,” Mr. Drainville said. “If we want to find a certain cohesion and avoid tensions, we need a framework.”

The PQ has suggested part of that framework will involve banning the wearing by public servants of such religious symbols as the Muslim headscarf, Jewish yarmulke and Sikh turban. The poll asked people whether it would be acceptable for public servants in a range of fields to wear religious symbols. For every job – including daycare worker, teacher, doctor and bus driver – a majority said it would not be acceptable.

The poll also asked whether an athlete should be allowed “to adapt his clothing or his equipment for religious purposes.” Quebec sports federations have taken a hard line against Muslims and Sikhs competing in hijabs or turbans. The poll found that 81% of respondents opposed accommodating the players.

The PQ has helped foster such sentiment, but it is learning just how tricky the issue of defining secularism can be. The minority government has already had to delay introduction of its charter, initially planned for this spring, until the fall. And a Quebec Court of Appeal ruling this week sent a signal that religion cannot be entirely silenced within government. The court ruled in favour of the mayor of Saguenay, who has insisted he has the right to begin council meetings with a prayer to “almighty God.” The court also declared a crucifix and statue of the Sacred Heart in city hall to be historical artifacts that should be allowed to stay.

Mr. Boudreau is not in favour of elected officials instituting prayers, but he would like the bureaucracy to shed its allergy to all things religious.  His presentation at the conference encouraged participants to challenge the “nervous ninnies” in government who view religions as “dangerous things, dangerous concepts.” Citing Pope John Paul II, he said: “Be not afraid.”

Victor Goldbloom, a former provincial cabinet minister under Robert Bourassa and former chief executive of the Canadian Council of Christians and Jews, said it would take a concerted effort by all faith groups to stop secularization from going overboard in Quebec. “We cannot leave that debate exclusively to those who are pushing to make this a secular society. Our voices have to be heard,” he said in an interview.

“A secularized society, if it is simply the establishment of a state structure which is neutral, that is fine and that would be supported by the vast majority of people,” he continued. “But if secularizing society means silencing religions, then that’s going too far and is going against the human reality of what is still a substantial portion of the population.”

Marsha Mundy, an Anglican priest in a Montreal suburb, said she was moved to attend the conference after an experience last year involving a school in her parish.

A mother in her congregation had approached her about talking to her 11-year-old daughter’s class, where children were struggling to cope with the tragic death of a schoolmate. Ms. Mundy has experience counselling children, and the teacher was initially happy to have her speak about grieving. But after the teacher spoke to her superiors, she had to call it off.

“She had been informed that because I was of a religious order it wouldn’t be appropriate,” Ms. Mundy said.  “The door was closed.”

Anne Leahy, a Quebecer and former Canadian ambassador to the Holy See, told the conference that the upcoming debate over Quebec’s proposed Charter “will reveal how mature we are in our respect for others’ beliefs.” Speaking as a former diplomat, who also served in Africa’s Great Lakes region, she said the debate will have an impact beyond Quebec’s or Canada’s borders.

People in other countries look to Canada as an example of a place where people from different cultural and religious backgrounds live together in peace, she said.

“We’re going to have a debate in Quebec on the place of religious signs in institutions — perhaps in public, on the street, in the schools. How we’re going to conduct that, how we’re going to be respectful of traditions while ensuring that things don’t go overboard, I think people will be watching how we do this,” she said.

Mr. Boudreau said the obsession with religious symbols in the public service is a sign of  “liberal fundamentalism,” which views religion as  backward superstition best kept out of public view. “I just want civil servants to be polite,” he said. “I don’t care if they wear a hula hoop.”