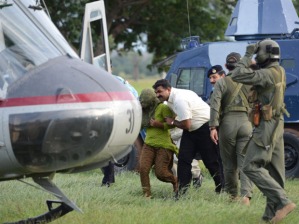 A Christian girl who was accused of burning Islam’s holy book in a case that focused international attention on Pakistan’s harsh blasphemy laws was forced to move to Canada over security concerns, her lawyer said Saturday.

Tahir Naveed Chaudhry said the girl left Pakistan with her parents, three sisters and a brother on March 14.

A Muslim cleric who lobbied for her release, Tahir Mehmood Ashrafi, said the girl had been facing threats and was moving constantly.

“I am sad that this innocent girl had to leave Pakistan. She had been acquitted by the court, and despite that it was not possible for her to live freely,” he said.

He called her case “an extraordinary example of brutal persecution.”

Due to safety concerns, the family’s exact whereabouts in Canada are being kept secret.

The girl was arrested in August in Islamabad after a Muslim cleric accused her of burning the Koran.

The cleric was later accused of fabricating evidence, and the girl was acquitted.

The case received attention in part because of her young age and questions about her mental abilities.

An official medical report at the time put her age at 14 although some of her supporters said she was as young as 11.

The medical report also said her mental state did not correspond with her age.

Even though the case against her was thrown out, people accused of blasphemy in Pakistan are often subject to vigilante justice.

Mobs have been known to attack and kill people accused of blasphemy, and two prominent politicians who have discussed changes to the blasphemy laws have been killed.