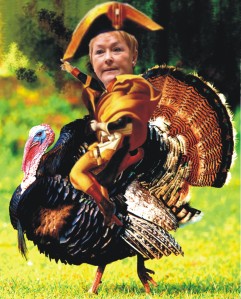 Just call it the Parti Québécois self-help holiday guide to defending the Quebec Charter of Values.

As Quebec families prepare to gather over tourtière and a bûche de Noël, the PQ has released a six-page document intended to address all the pesky questions that have arisen over Bill 60, the controversial legislation that forbid public employees from wearing conspicuous religious symbols on the job.   The internal PQ document, whose existence was disclosed on Tuesday in Le Devoir, is entitled “Bill 60: the Charter of Values. Answers to questions from your family for holiday parties!”

Its cover is illustrated with a turkey.

Since it was unveiled by the PQ government of Pauline Marois this year, the Charter has proven so divisive that most Quebec families would probably choose to talk about anything else at festive gatherings. As a general rule, politics and religion are off the table at Christmastime.

However, the party thought it would be a good idea to arm its members with ready arguments in case the hot topic comes up. Sylvain Tanguay, the director general of the PQ, said in an interview on Tuesday that the holiday guide was emailed to more than 10,000 members last Friday.

“It’s simply a synthesis of all the arguments and questions that came up during the fall,” Mr. Tanguay said. He referred to it as an end-of-year “memory aid” and said it was penned by the party’s communications team in Montreal.

The guide’s talking points unwittingly expose all the targets of the Charter’s many critics. For example, the document says that if a family member asks: “Why ban religious signs for all State employees?” the respondent should say that civil servants are already prevented from displaying their political views on the job (it does not mention that political allegiances are a choice, unlike religious affiliations).

The Charter will violate rights and freedoms – no problem(!)

Should an aunt or cousin pipe up: “The Charter is just dividing everyone,” a handy answer is: So did Bill 101, the French-language charter (critics note that Bill 101 addressed a widely recognized problem, while Bill 60 appears to address a non-existent one).

To the possible remark over eggnog, “We come off as racists around the world,” the guide’s writers propose the answer: “False!” and mentioning that European countries like France, Belgium and Germany have adopted secularization rules for State employees. The guide does not address the consequences of these rules.

The guide also brings up the oft-raised conundrum, “The Charter will violate rights and freedoms,” as well as, “The State in Quebec is already secular. There is no problem.”

Finally, the PQ guide provides a handy list of columnists and groups that have been sympathetic to the Charter; it does not mention the lengthy list of critics that include the Quebec Human Rights Commission, three former PQ premiers, several hospitals, universities and municipalities.

The document, in French, can be found at http://www.ledevoir.com/documents/pdf/charte_partys_des_fetes.pdf.