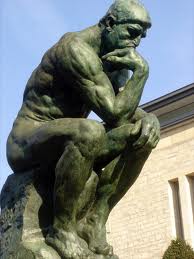 Some atheists are delighting in a groundbreaking University of B.C. psychology report that suggests analytical thinking can be harmful to religious faith.   Published in the journal Science, the study of 650 North Americans has gained worldwide attention for revealing religious belief drops after subjects perform analytical tasks or are exposed to Rodin’s sculpture, The Thinker.   The ABC News headline on their story, for instance, reads: “Religious faithfuls lack logic, study implies.” Nature News went with: “Is rationality the enemy of religion?” Many atheist and science blogs boast that the UBC study proves religion is unadulterated fantasy. They denounce religion with the same passion as celebrity atheists such as Richard Dawkins, Christopher Hitchens and Sam Harris.   But psychologist Ara Norenzayan, co-author of the UBC study, said this week he has spent most of his time telling global journalists what he and Will Gervais were not trying to say in their report, titled “Analytic thinking promotes religious disbelief.”   Even though the two psychologists found religious belief went down, temporarily, after subjects performed mathematical computations and other mental challenges, the duo’s report makes clear “analytic” thinking is just one way humans under-stand reality.   Another way is “intuitive” thinking. The UBC duo’s innovative study opens the door to what could be an enlightening cultural discussion of the many different ways humans think and feel – and how they influence our convictions about life, love, truth and spirituality.   For instance, many religious people would probably accuse me of being too “analytic.” Even though I affirm the spiritual impulse, I try not to accept too much on what some call “blind faith.”   That’s why I’m drawn to philosophy and systematic theology, which is often rigorously rational.   Given this, neuro-psychologists might suspect I am predominantly a “left-brain” thinker, since rationality is associated with the brain’s left hemisphere.   At the same time, I’m more than open to what can be learned about reality through intuition, or so-called “right-brain” thinking.   Intuition governs much of what we do and experience – in our relation-ships, habits, imaginations, values and approach to the arts.   To be clear, I don’t have much problem with some of Dawkins’ and Harris’ denunciations of religious fundamentalism. There is a lot of authoritarian, thoughtless extremism in the world, though it’s hardly confined to the religious.   I have been disturbed, however, by the fact they have made small publishing fortunes arguing atheism alone is rational, while religion is nothing more than silly magic.   A common misunderstanding about religion comes from the way people define the word “rational.”   Dawkins and Harris are hardly alone in assuming any kind of thinking that is not analytical, or rational, is thereby   “irrational.” Indeed, Harris argues that faith is “belief without evidence.” His crusade is to eradicate faith so that reason can prevail.

However, it’s incorrect to assume anything that is not “rational” is there-fore nonsensical, illogical, absurd and ridiculous.   Instead, there is an entire realm of human, animal and ecological experience that is best described as “non-rational.”   Such “non-rational” realities – including intuitions, emotions, the unconscious and creativity itself – are just as real, if not more so, than many things understood through rationality alone.   Many great thinkers have been aware of this distinction. Albert Einstein was one of them.   “Imagination is more important than knowledge,” Einstein said. “For knowledge is limited to all we now know and understand, while imagination embraces the entire world, and all there ever will be to know and understand.”   Still, many continue to have a difficult time overcoming today’s conventional wisdom, which claims rationality is always superior.   Prof. Dan Ryan, a sociologist at Mills College in California, struggles to educate people about the limits of rationality.   “If rationality is all it’s cracked up to be,” Ryan says, there should be more convergence in society. Instead, “rational experts often disagree.”   The Yale-educated sociologist says many human functions are not strictly rational.   Sigmund Freud, an atheist, pointed to one: the power of the unconscious mind, which harbours hidden fears and desires. Karl Marx, another atheist, taught that people don’t realize many of their values are based on their economic class.   In addition, the California professor says people who stress rationality might argue it’s often smarter to be selfish – by cheating or free-riding. But most people try to act morally, because of an unspoken social contract. Indeed, Ryan is not alone in maintaining that an over-reliance on rationality can be dangerous to our well-being.   A leader in the intersection of science and spirituality, Georgetown University’s John Haught, says “rational-ism imprisons human minds no less than the worship of idols keeps religious people from developing a liberating relationship to the whole depth of being.”   It’s misleading for Harris to define faith as “belief without evidence,” Haught says. Faith, which is similar to “trust,” is embedded in our humanity. Atheists, for instance, act out of faith when they trust their partners, or even when they hope rationality is capable of solving every problem.   There are thousands of things humans accept without hard rationalistic proof. These things include compassion for partners, children and animals; the wisdom of dreams and emotions; and the appreciation of beauty.   Even though atheists are correct in saying many faithful people do come to irrational “supernatural” conclusions, Haught says theologians have for centuries offered a more complex definition of faith.   In his book God and the New Atheism, Haught writes: “Theology thinks of faith as a state of self-surrender, in which one’s whole being, and not just the intellect, is experienced as being carried away into a dimension of reality that is much deeper and more real than anything that can be grasped by science or reason.”

A high-profile Canadian neuropsychologist, the University of Montreal’s Mario Beauregard, celebrates some of these deeper dimensions in his latest book, Brain Wars: The Scientific Battle Over the Existence of the Mind.   Beauregard challenges the materialist mindset of atheists such as Harris, who tend to believe “the brain is just a computer made of meat” and who teach everything can be objectively reduced to rationality.   Examining the emerging science behind such “unexplained” phenomena as the placebo effect, self-healing, meditation and near-death experiences, Brain Wars asks readers to consider the immense untapped power of the mind. Brain Wars points boldly to what the UBC researchers only briefly touch on in their report in Science magazine, where they acknowledge humans have always used both “analytic” and “intuitive” minds.   Even though Harris and other atheists claim science is essentially analytic, another novel study has thrown a wrench into such simplistic stereo-types separating scientists and religious people.   The recent psychological study of more than 200 climate change scientists, performed by Susan Weiler, discovered three out of four of the scientists were highly “intuitive” – com-pared with only one of four in the general population.   In other words, as Einstein suggested, authentic scientists may well be rational and analytic – but they also have imagination, vision, empathy and a sense of values and esthetics. All of which helps guide them in their intellectual pursuits.   In that way, scientists are just like many spiritual people.