Care for some Anti-Christian hate with that? 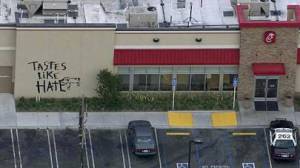 A gay rights advocacy group in Illinois has launched a series human rights complaints with Illinois state government against Chick-fil-A for supporting marriage, the day before a national homosexual “kiss-in” was planned to take place.

After filing the complaint Thursday with the Illinois Department of Human Rights, Jacob Meister, Governing Board President of The Civil Rights Agenda (TCRA) said that Chick-fil-A’s stance on marriage was to blame for a widespread stigmatization of homosexual individuals.

“In our current high speed media and social media environment, Chick-fil-A has announced and caused to be published, to hundreds of millions of people, that LGBT people are unacceptable and objectionable,” said Meister. “They have made it clear the lives of LGBT individuals are unacceptable to them and that same-gender families are unwelcome at Chick-fil-A.” The attorney alleged that Chick-fil-A’s “intolerant corporate culture” violated Illinois law.

Meanwhile, gay rights supporters on Friday launched a “Kiss-In Day” in front of Chick-fil-A restaurants across the country in response to the August 1 “National Chick-fil-A Appreciation Day.” Both events came in reaction to CEO Cathy’s statements last month supporting Biblical values for traditional marriage, words that prompted the mayors of Boston and Chicago to call for the banishment of the chicken chain. D.C. Mayor Vincent Gray followed suit, dubbing the company’s famous sandwich “hate chicken.”

Chick-fil-A officials confirmed this week that the sales on August 1, which saw thousands of supporters clog lobbies, drive-thrus, and even nearby traffic as they waited for a turn at a hot chicken meal, broke records. Pastor Rick Warren had tweeted that CEO Dan Cathy said the chain had surpassed a new world record.

The homosexual “kiss-in” has been used by the gay lobby in several protests, particularly in Europe against the Catholic Church, where supporters planned such an event in front of Pope Benedict XVI during his visit to Spain in 2010. French demonstrators attempted the same in front of Notre Dame Cathedral the same year.

In terms of social media, the event has left less of a mark than Wednesday’s show of support. While Chick-fil-A Appreciation Day garnered over 670,000 supporters on a Facebook event page sponsored by Mike Huckabee, as of Friday afternoon, about 14,000 had signed up on the “National Same Sex Kiss Day at Chick-fil-A” Facebook event, and only two “kiss-in” images had been uploaded to the Tumblr account posted on the page.

Employees faced backlash both inside and outside their stores this week. A California Chick-fil-A was vandalized with large black graffiti spelling, “Tastes like hate.”

A viral video captured a man in Tuscon, Arizona, badgering a female Chick-fil-A employee on Wednesday for working for a “hateful corporation.”

“I don’t know how you live with yourself and work here, I don’t understand it,” said the man, Adam Smith, in the video of himself he posted on YouTube.

The company for which Smith was acting as CFO, the medical supply manufacturer Vante, said this week it immediately fired him after seeing the intolerant behavior in the video.

Read the original article at http://www.lifesitenews.com/news/chick-fil-a-faces-vandalism-human-rights-violation-complaints-for-defending