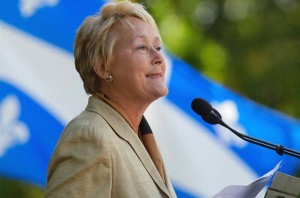 The Parti Québécois is putting the emphasis squarely on nous — us — in this election campaign. Its slogan and theme song declare, “For us to choose” (À nous de choisir). But with each day it becomes clearer that the PQ’s nous is actually a select group.

On Tuesday, PQ leader Pauline Marois travelled to Trois-Rivières to announce her party’s plan for a Charter of Secularism that would, among other things, prohibit public-sector employees from wearing “conspicuous religious signs.”

She did not spell out exactly which conspicuous signs would be forbidden, but in the past the party has identified the Muslim headscarf, or hijab, the Jewish skullcap, or yarmulke and the Sikh ceremonial dagger, or kirpan, as problematic. The ban would apply to everyone from schoolteachers to liquor-store clerks.

One religious symbol that would be spared is the crucifix, which tells you everything you need to know about the PQ’s supposed neutrality toward religions. The party is all for ridding the state apparatus of any inkling of religion, except when it comes to Christian symbols. Those, it says, are not really religious but part of Quebec’s cultural heritage.

Quebecers are open and proud to welcome people from all over the world. However, we insist on conserving our identity, our language, our institutions and our values   “There is no question of touching certain traditions that make up part of our heritage, such as the Christmas tree,” Ms. Marois said. Twice in the space of a one-page statement she repeated the sentence: “We do not have to apologize for being who we are.” To emphasize her point, she held her news conference at a historic sawmill that was run by a Catholic religious brotherhood.

The subtext is that Quebec’s cherished traditions — its Christmas trees, its crucifixes, maybe even its sawmills — are under attack. There is little mistaking whom Ms. Marois holds responsible. “Quebecers are open and proud to welcome people from all over the world,” she said. “However, we insist on conserving our identity, our language, our institutions and our values.”

Ms. Marois said her project is necessary to ensure the religious neutrality of the state and the equality of the sexes, even though the provincial Charter of Human Rights and Freedoms already protects against discrimination based on gender or religious affiliation.   The separatist PQ is counting on the identity issue to rally its more hardline supporters, for whom the French language is under constant threat. The secularism initiative came two days after Ms. Marois spelled out her plan to extend Bill 101 to block children of immigrants and francophones from attending English-language CEGEPs, the province’s pre-university colleges. Currently the Bill 101 restriction ends after high school.

I believe that Quebecers have a much deeper attachment to the religious symbols that allowed the Quebec people to survive on American soil   She cited statistics showing that the proportion of Quebecers whose mother tongue is French has dipped below 80%, and on the island of Montreal it is less than 50%. “Without a significant change of course from a linguistic point of view, the situation will only get worse,” she warned. Of course, no law can change one’s mother tongue, so again the message was that the immigrants whose first language is not French are threatening Quebec’s identity.

Anyone truly committed to secularism would be appalled by the crucifix that hangs prominently behind the speaker’s chair in the National Assembly, but Ms. Marois said it is there to stay. (She did say, however, that she would consider removing some of the symbols of the monarchy that adorn the legislature, showing that some traditions are more disposable than others.)

“I believe that Quebecers have a much deeper attachment to the religious symbols that allowed the Quebec people to survive on American soil,” she said.   She gave her plan the lofty-sounding title of Charter, but in fact it sounds closer in spirit to the “Code of Life” adopted in 2007 by the Quebec town of Hérouxville, about half-an-hour’s drive from where she held her news conference. That document told potential immigrants that stoning women was not allowed and that “at the end of every year, we decorate a tree with balls and tinsel and some lights. This is normally called ‘Christmas decorations’ or also ‘Christmas tree.’ ”

That year, Mario Dumont proved that playing up the threat posed by religious minorities could be a winner at the ballot box, as his Action Démocratique du Québec nearly defeated the Liberals. Ms. Marois, whose PQ leads in the latest polls, is calculating that similarly divisive tactics will be even more successful in 2012.

Read the original article by Graeme Hamilton at http://fullcomment.nationalpost.com/2012/08/14/graeme-hamilton-pauline-marois-two-tier-secular-vision-for-quebec/