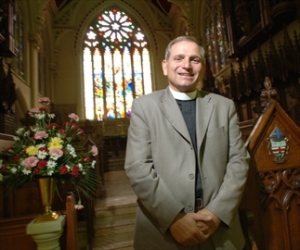 HAMILTON, ON – The Bishop of Niagara is suing a blogger over online material he claims was fashioned to hold the spiritual leader of 25,000 Anglicans up to ridicule and contempt.

The defamation lawsuit claims that Michael Bird, Hamilton-based bishop for the 90 parishes in the diocese, which includes Hamilton, has been pilloried on the blog as a weak, ineffectual leader, portrayed as a thief, described as having a sexual fetish and labelled an atheist.

A post that photo-shopped Bird’s face onto pictures from the funeral of former North Korean leader Kim Jong Il, and a photograph of Bird appearing to wear underwear on his head are among posts identified in the bishop’s statement of claim.

A caption on the underwear post read, “Thief steals knickers from Anglican charity shop … it could be an undie fetish.”

The lawsuit says another post falsely asserted Bird took delight in the closure of St. Hilda’s Church in Oakville — one of three retained by the Niagara Diocese in a 2012 settlement with breakaway congregations. Another post cited in the suit shows a photo of the bishop under the caption, “Mercedes-Benz Uses Communist Madman to Sell Luxury Cars.”

Bird is seeking $400,000 in damages from David Jenkins, an Oakville resident who operates the blog Anglican Samizdat. The lawsuit also requests an injunction prohibiting Jenkins from publishing further comments about Bird.

In a statement of defence, Jenkins describes many of the online items as humour or satire, saying “no reasonable viewer or reader of the blog postings would be expected to believe that the statements are true.”

Jenkins also says he was “exercising his right to freedom of religion and expression” and that online posts are fair comment on a public figure.

Bird’s lawsuit attempts to limit Jenkins’ freedoms under the Canadian Charter of Rights, the statement of defence says.

None of the allegations has been proved in court.

“If you look at the nature of the comments about him (Bird), they have nothing to do with his being a public figure,” said Graydon Sheppard, the Hamilton lawyer representing Bird. “They have to do with scurrilous attacks on his character.”

Sheppard said Bird’s lawsuit “is a last desperate measure on my client’s part. He has been turning the other cheek for over two years and it just has become intolerable.”

Hamilton lawyer Doug Simpson, who represents Jenkins, said that “we don’t believe at the core that the statements that were made were defamatory for a number of reasons, including the fact they were fair comment and that it was an expression of humour.”

Jenkins’ statement of defence also questions whether Bird’s complaints met the required notice provisions of Canada’s Libel and Slander Act. It also states that some of the online examples cited in the statement of claim are not accurately quoted or described.